I’ve fallen behind in my pursuit of the perfect biscuit recipe. McB was sick and it felt wrong to subject him to biscuit experimentation during his illness. 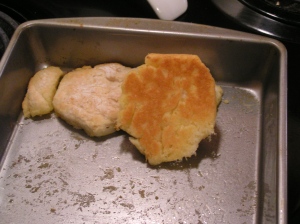 This morning, I got us back on track with Plain Chicken’s 7Up Biscuits. Even before I tasted these little bits of heaven, I loved that these biscuits take so few ingredients – just Bisquick, 7Up, sour cream, and butter. The flavor is amazing and the biscuits are so tender and moist. These are definitely the best biscuits that have ever come out of my kitchen.

Of course it can’t all be rosy, the actual preparation is just a bit tricky because the dough is so soft/moist. I had to add about 1/4 cup of Bisquick so I could make it stiff enough to pat out and then cut the biscuits. I had to use a spatula to lift the biscuits from my board and into the pan because they fell apart when I tried to use my hand. All the little headaches of dealing with this dough are worth it because moist dough makes for melt-in-your-mouth biscuits.

Now for the other cloud in this otherwise sunny experiment, McB said that the biscuits were “very good” and then added “for biscuits.”  He went on to say that he would have preferred a piece of toast. Who in their right mind would want a dry piece of toast instead of this moist, buttery biscuit? Only my sweet husband.

So the search continues…

For anyone who might be new to the blog, I’m trying in vain to find a biscuit recipe that my husband likes. He thinks biscuits are hot, bread-flavored hockey pucks and I’m determined to find the magic recipe that will change his mind.

As I mentioned in the first OPERATION BISCUIT post, McB prefers canned cinnamon rolls to homemade ones or even Cinnabon-made ones. I feared that the same might be true for biscuits so before going any further with homemade recipes, I decided to take a step back and buy canned biscuits.

For my testing purposes, we had the Great Value version of butter-flavored, flaky Grands.

McB found them to be “bready.” I don’t really understand this critique. As I asked him, it is bread, so is that good or bad? Beefy cheeseburgers are good but I have come to understand that a bready biscuit is not.

I thought the canned biscuit was OK but as the day progressed, it began to sit like a little lead ball in my stomach.