I’ve fallen behind in my pursuit of the perfect biscuit recipe. McB was sick and it felt wrong to subject him to biscuit experimentation during his illness.

This morning, I got us back on track with Plain Chicken’s 7Up Biscuits. Even before I tasted these little bits of heaven, I loved that these biscuits take so few ingredients – just Bisquick, 7Up, sour cream, and butter. The flavor is amazing and the biscuits are so tender and moist. These are definitely the best biscuits that have ever come out of my kitchen.

Of course it can’t all be rosy, the actual preparation is just a bit tricky because the dough is so soft/moist. I had to add about 1/4 cup of Bisquick so I could make it stiff enough to pat out and then cut the biscuits. I had to use a spatula to lift the biscuits from my board and into the pan because they fell apart when I tried to use my hand. All the little headaches of dealing with this dough are worth it because moist dough makes for melt-in-your-mouth biscuits.

Now for the other cloud in this otherwise sunny experiment, McB said that the biscuits were “very good” and then added “for biscuits.”  He went on to say that he would have preferred a piece of toast. Who in their right mind would want a dry piece of toast instead of this moist, buttery biscuit? Only my sweet husband.

So the search continues…

McB’s common complaint about biscuits is that they are too “bready.” I began to think if I could solve this problem, I might find a biscuit he will eat. Since I can’t change the composition of a biscuit, which is essentially bread, I decided to bust out a flavored biscuit recipe. My friend sent me a link to these cheddar garlic biscuits. I mixed things up and made these for breakfast last week.

McB said that he liked the fact that the biscuits had a flavor other than bread and butter. I was torn because I had some positive feedback for the first time in this experiment but since “bread” and “butter” are two flavors that I enjoy, it was also a little hard to hear. He went on to say that the garlic was a little overpowering. I wonder if he would feel that way if I had prepared the biscuits at dinner instead of breakfast.

I am now looking for herbed biscuit recipes though I plan to tackle Plain Chicken’s 7up Biscuits next, so more “bread” and “butter” for him and more heaven for me.

For anyone who might be new to the blog, I’m trying in vain to find a biscuit recipe that my husband likes. He thinks biscuits are hot, bread-flavored hockey pucks and I’m determined to find the magic recipe that will change his mind.

As I mentioned in the first OPERATION BISCUIT post, McB prefers canned cinnamon rolls to homemade ones or even Cinnabon-made ones. I feared that the same might be true for biscuits so before going any further with homemade recipes, I decided to take a step back and buy canned biscuits. 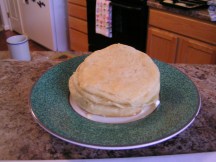 For my testing purposes, we had the Great Value version of butter-flavored, flaky Grands.

McB found them to be “bready.” I don’t really understand this critique. As I asked him, it is bread, so is that good or bad? Beefy cheeseburgers are good but I have come to understand that a bready biscuit is not.

I thought the canned biscuit was OK but as the day progressed, it began to sit like a little lead ball in my stomach.

My husband loves breakfast but he just doesn’t like biscuits. My theory is that during his childhood in Brooklyn or late teen years in Ohio, he encountered some truly awful, dry bread object masquerading as a biscuit that ruined his appetite for them. This is the only explanation that could make sense to someone who has tasted the warm, fluffy heaven that is a good biscuit.

It was easy to overlook his disdain for biscuits when we lived in Ohio. I’m not a fan of biscuits from either Bob Evans or Cracker Barrel and those were considered the cream of the crop there. At the time, I didn’t have the desire to try to perfect my own biscuit making skills.

Now that we’re in the South, I feel it’s time to hone my own biscuit making skills. I come from good cooking stock and my Granny made wonderful cathead biscuits, even if they did end up burnt now and again. There are hundreds of biscuit recipes out there, I’m bound to find something that I can make and that he will like, right? In that hope, we began OPERATION BISCUIT this morning.

Our first recipe was the very basic one found on the box of Heart-Smart Bisquick.

We ended up with five nice sized biscuits.

Mr. McB’s verdict? He thought his buttered biscuit was heavy (later revised to dense) and dry.

I found the biscuits to be pretty light and not at all what I would consider dense. They weren’t buttered in any way on the outside but I found my biscuit (pictured here with red currant jelly) to be pretty moist and flavorful. They weren’t the best biscuits I’d ever had but they were sturdy and tasty.

I can tell it is going to be an uphill battle if he’s already throwing out so many bad adjectives to describe these perfectly passable biscuits.

My plan was to continue with Plain Chicken’s 7Up Biscuits next but I think we need to add in a “control” for this experiment by way of a can of biscuits from the refrigerator section of the supermarket. You can roll your eyes, but my husband actually prefers Pillsbury’s canned cinnamon rolls to any rolls I’ve ever made from scratch. Heck, he prefers them to Cinnabon. Given this information, I feel we need to make an effort to rule out a fondness for refrigerated biscuits before moving forward.

If you have a biscuit recipe that you’d like to see added to Operation Biscuit please share it. My goal is to try one new biscuit recipe each week until I’m successful or McB wears down my will to continue.

I try to prepare healthy meals. McB and I both exercise and eating a good diet is part of the equation for good health. The healthy meals also make us feel a tiny bit less guilty when we indulge at The Chocolate Moose.

I ran across this recipe for pizza with a cauliflower crust and decided to give it a go. McB is picky and doesn’t like cauliflower so I knew it was a gamble. It’s not his favorite pizza, I knew it wouldn’t be. As a Brooklynite he is pretty particular about which pies can even be called a pizza, so I knew this would not be a love story. It’s a “like” story with lots of veggies so I call it a victory.

You can view the original recipe at Eat. Drink. Smile. My version with little tweaks and notes is below.

Here’s what you’ll need to make the crust. You are on your own for the toppings.
– one head of cauliflower (You’ll need 1 cup of cooked, riced cauliflower for the final product. You should be able to get at least two crusts from a single head.)
– various dried Italian herbs (My mix consisted of 3 tbs basil, 1 tbs oregano, 1 tbs McCormick Italian blend from the grinder, 1 tsp garlic powder, 1 tsp reduced fat Parmesan cheese, and a dash of black pepper. You might not need as much seasoning. I was trying to erase all traces of a cauliflower flavor.)
– one egg (beaten) or 1/4 cup of egg substitute/egg whites
– one cup reduced-fat, shredded, Italian cheese blend

Begin by removing the leaves from your cauliflower. Wash it and allow it to dry before breaking it apart.

Remove the stem pieces and keep the florets. It is best to go ahead and break up the cauliflower into small pieces at this stage. For me, ricing is easier if you are already working with smaller bits.

I used my Bullet (OK, the faux Black & Decker version) to rice the cauliflower. You want to mince it down to the consistency of rice (thus ricing) and you want to avoid pureeing. Since I am using a small device, I riced in four small batches. I ended up with 1.5 cups of uncooked, riced cauliflower. It loses some volume as it cooks so you’ll want to have more than one cup raw. I added half my seasoning to the cauliflower at this point. I wanted it to meld with the flavoring as soon as possible.

This is my very lovely riced cauliflower and seasoning.

When the cauliflower was done, I let it cool a bit before adding in the rest of the dry seasoning, the egg, and cup of shredded cheese.

After everything was combined, I poured the mixture onto a sheet of parchment and made a circle. I decided a thin crust would crisp better.

The crust baked at 450 for 12 minutes. I then added my toppings – chicken breast with BBQ sauce and spinach. This was already cooked and warmed in the microwave. I then topped with cheese.

I baked the pizza for another five minutes at 450 and then when the cheese wasn’t browning, I decided to use the broiler. There was a broiler mishap (first use for the new oven’s broiler) so I had to scrape off all the cheese and put the pizza back in for five minutes. This time I used a cheddar/moz mix and had much better results. 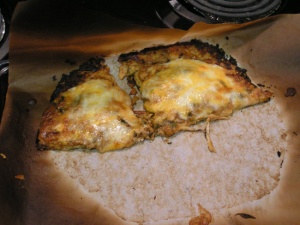 You can clearly see that the broiler mishap left a mark on the parchment. The edge of the dough looks black but it really isn’t burnt.

I put too much saucy topping on the pizza. I was able to pick it up (at least in parts) but it was just too heavy flavorwise.

I performed a correction-of-errors and removed the toppings from McB’s second piece. He saw it later the same night recycled as his snack. There is no sauce on this piece other than a bit of residual BBQ.

We’ll see this on the menu again. I have ideas for tweaks. I might try fresh basil and some crushed red pepper to season the cauliflower mixture.

For McB’s benefit, I promise this will never replace our every-other-Friday pizza.

I was looking for new recipes when I came across this one for cake batter dip. It’s easy to make with just three ingredients. Better still, the recipe makes a small batch.
Here’s all you need.
3 tbsp cake mix
2 tbsp yogurt (I used fat free vanilla for one mini batch and fat free cinnamon roll for another. The difference is very subtle.)
1 tbsp cool whip

Mix everything together – my cake mix was a little resistant to mixing with these cold ingredients so be sure to stir aggressively.

Refrigerate for at least an hour. You can serve with animal crackers, Teddy Grahams, fruit, pretzels, or anything else that could use a bit of cakey goodness.

I plan to use sugar free cake mix when I run out of funfetti. I might even try chocolate. I also think Publix’s carrot cake yogurt could result in a yummy experiment.

This is McB’s snack tray for the evening (apple and carrots not pictured.) Please don’t judge me for reusing the yogurt containers. I’m just classy like that.