After a year of planning, Mr. McB and I left for our Mediterranean cruise on Saturday, Nov. 9. The details and photos from the trip will be shared in a series of blog posts. I’m thinking one from each port. I’m also thinking this could take from now until mid-December since I have more about 2,000 photos to cull down.

On Saturday morning, we drove to Charlotte for our flight to Barcelona. For all the rocking chairs and Southern hospitality inside CLT, the long term parking lot and shuttle service is not the least bit welcoming. There was a small shrub growing up from the pavement in our parking space. By time we returned, we were dealing with Charlie Brown’s Christmas tree. The shuttle drivers were not friendly and did not assist with the bags. They growled when spoken to. Clearly, we were spoiled by the sweet and helpful drivers at CMH.

We took a puddle jumper down to Miami and a few hours later, we were on an American flight for BCN. We don’t fly American frequently so I don’t know if this happens on all flights but they played the truly bizarre “piano pop” tunes while we were getting on and off the plane. “Radioactive” greeted us as we found our seats. “Can’t Hold Us” was there the next morning as all us sleepy, stinky passengers jockeyed for position as we deplaned.

After going through passport control and grabbing our bags we were in a cab and off to the ship. Here’s a tip, always check the price of a cab verses the cost of the cruise line’s transfer from the airport. We paid less than 35 euro, tip included, for the cab and would have forked out almost $180 to take the transfer. There are certainly countries where I would not have felt comfortable with this option but our Spanglish is pretty solid and we had a printed copy of the address so we went for it.

We originally had this crazy idea that we might head into Barcelona after dropping off our bags. This went out the window when we realized just how tired we were. We took the time to explore and get acquainted with our new home.

There’s the sea and the sundeck. 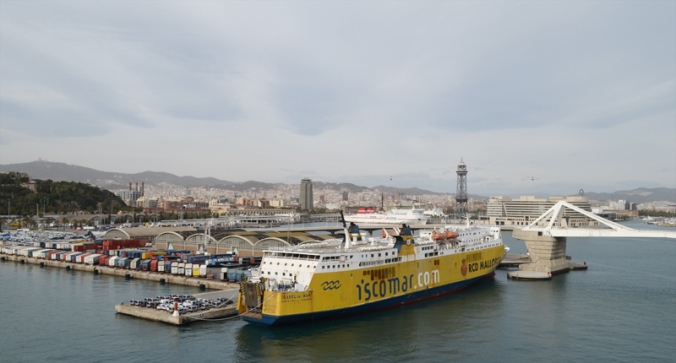 The first of two lattes from Barista’s, Marina’s coffee bar. Mr. McB enjoyed a couple of Americanos before our cabin was ready for us. I highly recommend high-octane European coffee as a fabulous way to fight off a headache.

After we settled into our cabin, our stewards stopped by to introduce themselves. We then took much-needed showers and prepared for our first night aboard. The most important matter of business before leaving port was our lifeboat drill. As you can see, McB took this very seriously. 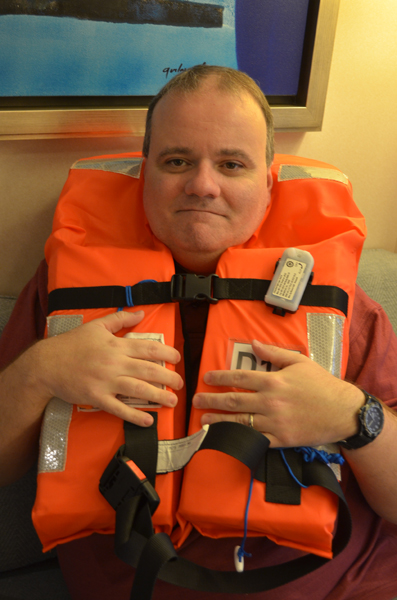 After the drill and dinner in the Terrace Cafe, we returned to our stateroom to watch the ship leave port. How lucky were we to have this kind of sunset? That’s another, much larger, ship pulling out of port. 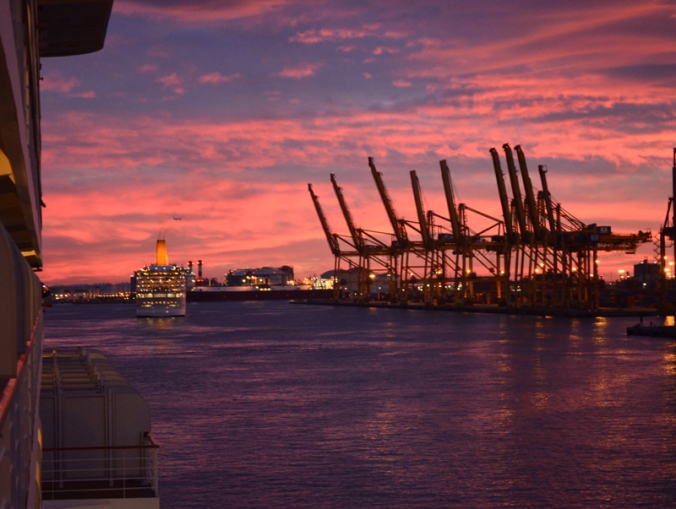 Look for photos and stories from Valencia, Spain, our first stop, in my next post.