During our last trip to downtown Greenville, Mr. McB and I had lunch at Grill Marks, 209 S. Main Street.

Since Grill Marks is part of the Larkin’s family, we went in with high expectations.

The decor was also confusing to me. This is a grill, albeit modern and upscale, and a large part of the beverage menu is focused on the milkshakes and floats, including the spiked versions of these classic treats. Yet there are empty wine crates displayed on a loft above the bar. There is also a big focus on wine in the decor at the bar. It wasn’t very cohesive. 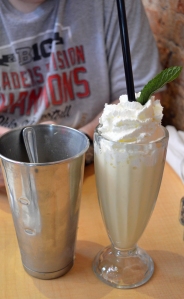 Enough about the decor and seating, let’s get to our meal. Mr. McB had the Madagascar vanilla version of the $5 shake. Five bucks is a bargain for the high quality milkshake you’ll get from Grill Marks. First, it is served the way it should be with patrons receiving the main portion in a frosted glass and the remainder in the metal mixing cup. Second, this shake is made with premium ingredients. It reminded me that vanilla is indeed a flavor and not just a synonym for “plain.” McB was very happy with his milkshake. I will definitely indulge in a shake of my own (salted caramel? chocolate chili bacon?) during our next visit.

We both decided to get a burger and split an order of “fat” fries.

The fries are nothing special. They were not piping hot or crispy. I believe the restaurant puts most of its effort into the truffle fries and the other options (skinny, fat, and sweet potato) are not given as much care. I would probably order a side salad instead of fries on my next visit. 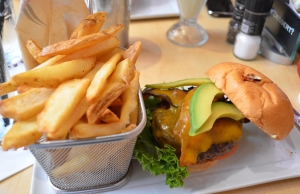 In this picture you see my burger, the left coast, and our basket of fries. The menu says that burgers will be cooked to medium unless otherwise specified. I ordered the burger medium and found it to be quite undercooked. The center was bright pink, barely warm, and had a consistency of raw meat. I sent the burger back and was quickly greeted with a fresh replacement. This one might have been a bit closer to medium-well but that was just fine with me. The manager said that they would rather undercook than overcook the meat but he agreed that my original burger was not medium. Keep this in mind when deciding how your burger should be prepared. I really enjoyed my second burger. The cheddar, avocado, and bacon added a nice element to this juicy burger.

Mr. McB ordered his burger well-done and it was served that way. More importantly, it was juicy. It’s almost impossible to get a juicy, well-done burger; he was very satisfied. He was also happy with the brioche bun.

Other than the fries, we enjoyed our meal and would recommend Grill Marks to others.