During our friend’s visit, McB and I wanted to show her the many charms of downtown Greenville including Falls Park, Mast General Store, Liberty Bridge and the Swamp Rabbit Trail to visit Cleveland Park and the Greenville Zoo. We love Greenville and just get so excited whenever we have a chance to show it off. After our lunch at Ford’s Oyster House and Cajun Kitchen, we may make it required eating for every visitor.

We arrived just after noon on a Sunday and were seated on the patio per our request. The patio is fairly large but it’s popular and filled quickly.

The service was great. Our waiter was careful to check back often while assuring us that we should take our time when deciding our on orders. 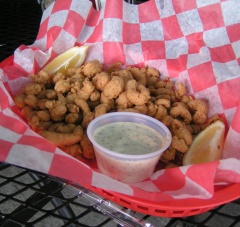 We started with a basket of crawfish tails. Their slightly sweet meat was very tender and the fry-batter was just a bit zesty. The aioli that accompanied the tails had a nice kick and added to the flavor but the tails were also delicious with just a squeeze of fresh lemon juice.

For his entree, McB selected the crawfish carbonara. The folks at Ford’s were happy to hold the mushrooms per his request. He liked the dish and found the cream sauce to be light enough on what was an increasingly hot and sunny day. The only downside to the dish was the inclusion of diced green peppers. This was not mentioned on the menu and had he known, McB would have asked to have them held off the dish as well.

Our friend selected the blackened salmon BLT for her lunch. She enjoyed the large sandwich and the side of grilled zuchinni and squash. She did find the fish to be a bit spicy so consider yourself warned.

I could write an entire post about the heavenly flavor of my lunch. Even though it’s been two weeks since the meal, my tastebuds can still tap into their happy memories of the delicious fried oyster po’boy and red beans that graced my basket. We’ll start with the sandwich. This monster is served on Gambino’s french bread. Yes, the New Orleans Gambino’s. It is dressed with lettuce, pickles, tomatoes, and more of the delicious aioli. The oysters themselves are plump and juicy. When smashed together, the textures and flavors of the sandwich’s ingredients produce the most amazing delight. It’s a bit of a bear to handle but when you’re lost in food bliss, you don’t care who’s looking at you.

Of course, I can’t stop writing about my food until I cover the red beans and rice. My only complaint is that the portion wasn’t  big enough. It’s not a fair complaint since I could have had a quart and still not been satisfied. These are some of the best red beans  I’ve ever had. Smoky, spicy and peppered with bits of sausage – this is how red beans and rice should be done.

As I wipe the drool from my keyboard, I do have to amend my statement about bringing every visitor to Ford’s. I’m not sure it’s the spot I’d pick for vegetarians. I feel there are other places that offer better veggie entrees and I’m not sure that the average vegetarian is wild about Cajun food in the first place. If you’re a vegetarian who loves Ford’s be sure to leave a comment with ordering suggestions that we could pass along to vegetarian visitors.

Ford’s is now my favorite restaurant in the Upstate. The food and service are both amazing. The prices were very reasonable for the quality of the food and portion size. McB and I look forward to heading back for the Sunday brunch buffet which features bananas foster french toast, an omelet station, chicken and waffles, oysters on the half shell and many other choices. My belly can hardly wait.