After our outing to the Greenville Zoo on New Year’s Eve, Mr. McB and I were starving. He really wanted pizza so we headed down to Pelham Road to have a pie at Bertolo’s only to find that they were closed. The same was true for Moe’s Southwest and Acapulco.  It was just four in the afternoon so the folks who own/run these establishments must have been gearing up for quite that party that night. 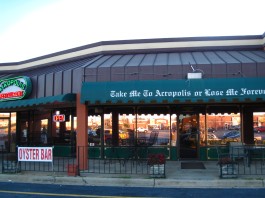 We notice that The Original Acropolis (3620 Pelham Road – Earth Fare Plaza) was open and since he was starving, McB was more willing to try a Greek restaurant that normal. Things were pretty quiet so we got a seat immediately. The décor is very showy. It seems that this is true of many Greek restaurants in the US. I don’t mind it, it’s just very…fancy.

We review the menu and quickly realize that Acropolis serves a mix of Greek and Italian dishes. This seems to be pretty popular in this area. We had a good experience at Greek/Italian Pomodoros just south of Asheville and our beloved Mythos pizza comes from a Greek/Italian kitchen.

I am pretty hungry so I select the moussaka. It’s a heavy dish but I’m hungry enough to handle it. McB picks pizza (regular Italian not the pita version.)

My meal came with a Greek salad. It was a good basic salad with a flavorful Greek vinaigrette that really popped with the olives and feta in the salad.

The moussaka was a bit different than what I was expecting. I was presented with a slightly Americanized version of Greek moussaka (eggplant/potatoes, seasoned ground beef, béchamel sauce) but it was surrounded by a hearty tomato sauce with slices of feta. It was like a little Italian moat around my moussaka castle. The core dish was good for the most part. The beef was well seasoned with the traditional cinnamon and all spice. The potatoes weren’t cooked as thoroughly as I would have liked.  There was also some bitterness to the eggplant but it’s eggplant and sometimes that just happens. The tomato sauce and feta pairing was good but I feel like they were there on the plate trying to cover for the shortcomings of the moussaka. While this odd combination wasn’t horrible, it didn’t provide the authentic experience I was looking for.

McB’s cheese pizza featured the same sauce that surrounded my moussaka. It was a heavy sauce that was applied liberally – too liberally for his taste. The crust held up to the sauce but the ratio of cheese to sauce was less than ideal. The next day I tried to have one of his leftover pieces as cold pizza but this pizza just isn’t made to be eaten cold. I wrapped it in foil and reheated in the oven. I wasn’t fond of the pie. The sauce was just too much for the pizza.

I’m not sure we’d head back to The Acropolis. We only go out once or twice a week so I don’t see us using one of our limited opportunities there. It’s not a horrible place, the service is good and the portions are plentiful and other than the pizza, the food isn’t bad. It’s just not the place I would pick.