My cruise posts aren’t over yet. Editing photos and writing up these posts is time consuming and I’ve been too busy to keep up.

So we’re going way back to Sunday, Nov. 17 and our stop in Livorno, Italy. The most popular excursions from this port go to Florence. We really wrestled with our decision on this one but chose to go to Tuscany. As I thought about it, I was only really considering Florence because I felt an obligation to go since other people said I should. I may give in to that in real life but not on vacation.

Our tour started in the medieval town of San Gimignano or St. Jimmy-John’s if you’re asking Mr. McB. It is that collection of distant towers in the photo above. 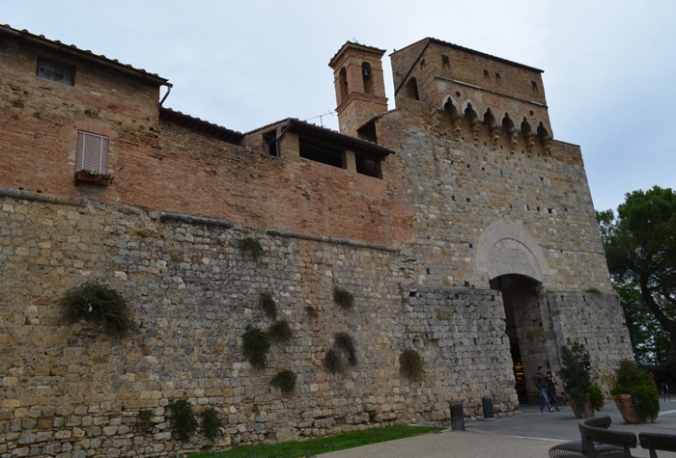 San Gimignano is known for its tower houses. In its heyday, there were more than 70 within the city walls. These were constructed with one room stacked on top of another. Workshops were located on the ground floor and living areas were on the the floors above. The levels were connected by moveable ladders instead of stairs for security purposes. The kitchen was located on the highest floor making it easier to escape in case of fire.

As with modern skyscrapers, the height of your tower was a direct indication of the size of your bank account. The highest tower was said to be about 50 meters or 164 feet tall.

When the Palazzo Comunale, or town hall, was constructed, there was a rule stating that no tower could be taller than the town’s tower. Officials removed parts of some structures to ensure that the rule was obeyed. The powerful Salvucci family got inventive and decided to create twin towers. Neither tower was taller than the town hall, yet their combined height would dwarf the municipal building. 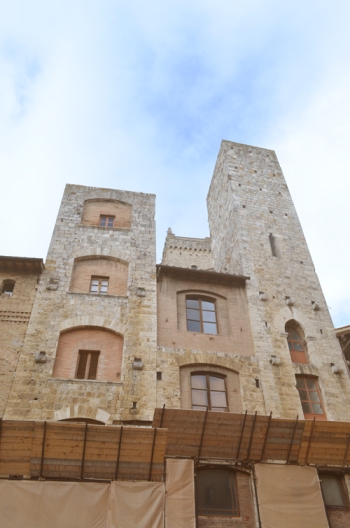 San Gimignano was a popular stop for pilgrims traveling the Via Francigena between Canterbury, England and Rome. The city was very prosperous between 1199 and 1353 but then it fell to the Florentines. In a show of power, they destroyed many of the towers and only 14 remain today.

The town is more than just towers though. It is full of many lovely sites including the quaint Piazza della Cisterna. The well is made of travertine. It was originally installed in 1273 and enlarged in 1346. Guccio dei Malavolti, the craftsman who enlarged the well, left his insignia on the side. See the ladder in the picture below? 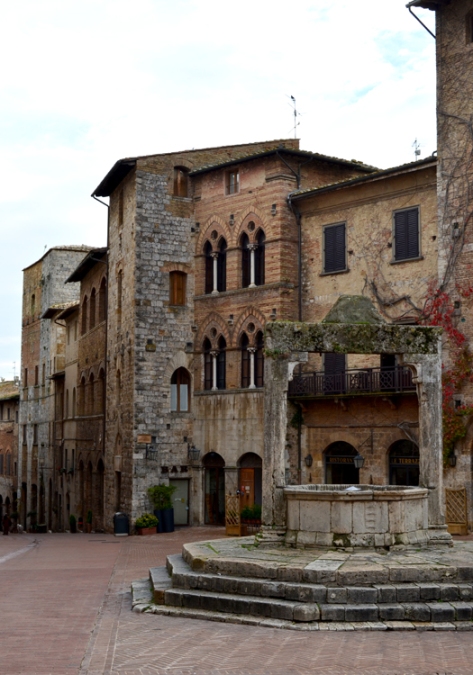 San Gimignano is also the site of the Basilica Collegiata di Santa Maria Assunta.
This duomo is rather modest from the outside but we heard the inside is very striking and features black-and-white marble arches and vaults. There are also a number of impressive frescoes. It was Sunday, so we could not go in. We could see the procession of tractors and other farm implements that were going to be part of the harvest blessing at the church.

This was shot as we walked into town.

This one was in front of the church. It was nice to get a glimpse into the traditions of this little town.

While the paintings inside the church were off-limits, we were able to see some frescoes in the courtyard of the Palazzo Comunale. 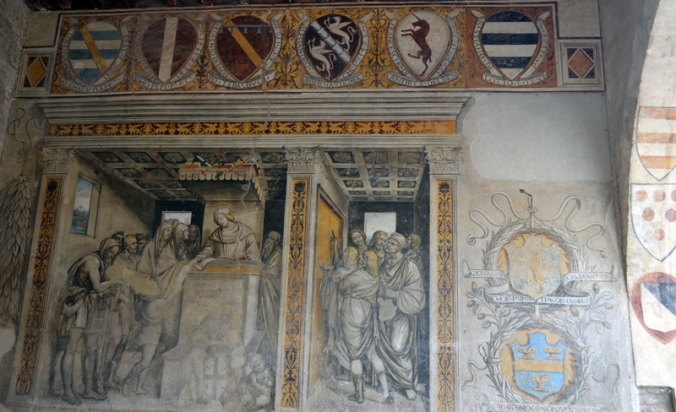 Painted in 1507 by Giovanni Sodoma, this is St. Ives Administering Justice. On the right side, the rich folks are trying to offer bribes but virtuous St. Ives has barred the door. He is interested in handing out real justice not being a puppet of the powerful. 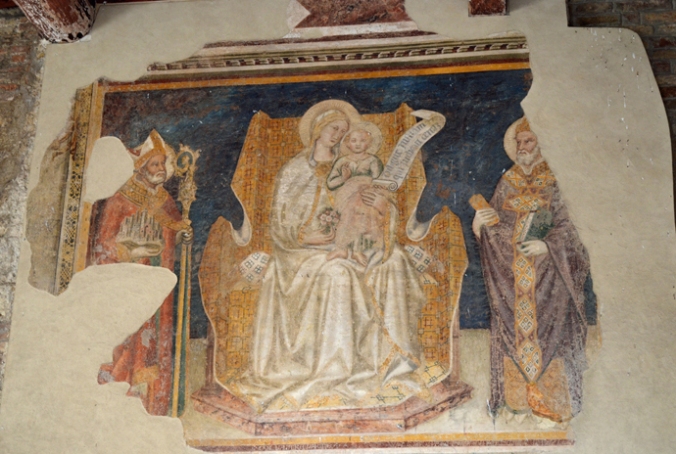 This is another mural in the courtyard. This one was painted in 1370. You can see San Gimignano in the hands of the figure on the left side.

We also did a little shopping. Our niece asked us to bring back a jewelry box. This seemed like a simple request but we were disappointed with the choices up to that point. Thankfully, San Gimignano came through for us in a big way and we found the perfect box. It was made from Carrara marble from a nearby mountain. It was a very elegant (and heavy) piece. 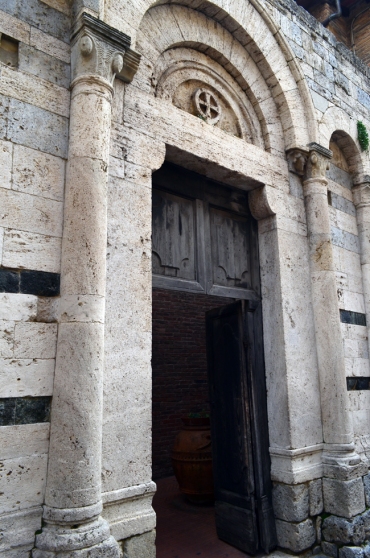 Another shot of the gate 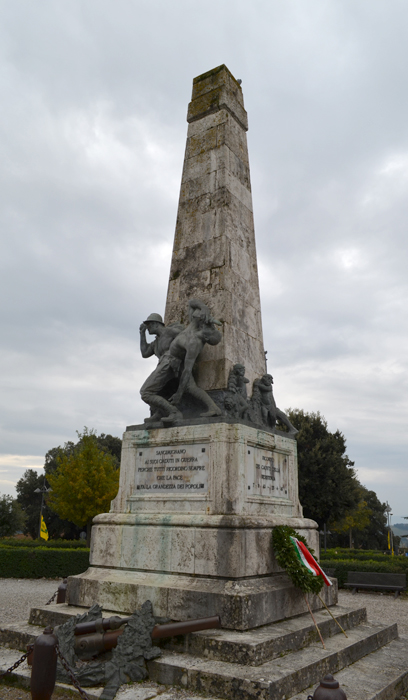 This is a memorial to soldiers from WWI.

We were soon back on the bus. On our way to Siena, the driver stopped to allow us to take some landscape photos and check out some of the olive trees that were almost ready for harvest.

Siena is yet another medieval town. Today, the city is known for its horse race called the Palio. While the Palio’s roots stretch back to the 6th century, some will recognize it as the horse race in Quantum of Solace.

This is the Piazza del Campo where the race takes place twice each year. The spectators are in the middle and the horses race around the on the black stones. 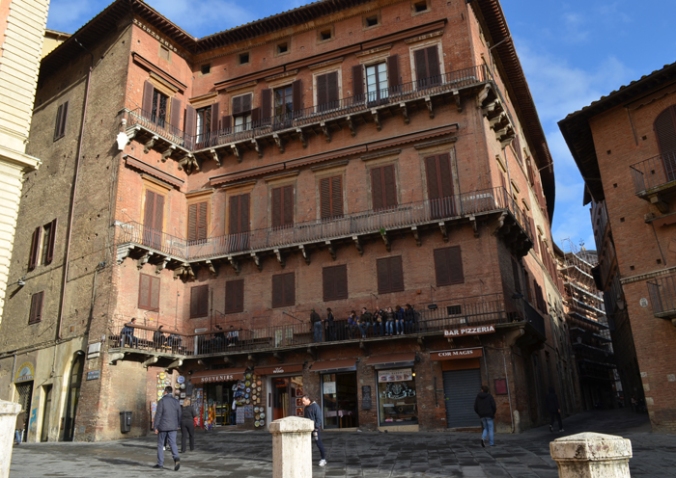 The buildings in the square also have little balconies that are very popular during the race.

The race is an opportunity for Siena’s various districts known as Contrade to compete for civic pride. The city has 17 Contrade that are represented by animals or other natural symbols. These are difficult to miss as you walk around the city. 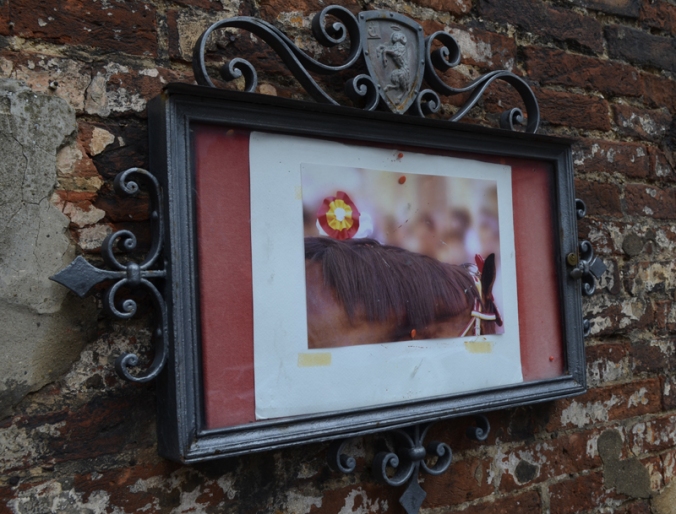 This is found on a building in the Contrada of Valdimontone (Valley of the Ram). Traditionally, the inhabitants of this neighborhood were tailors.

This is the intersection of Aquila (eagle, one of the four noble Contrade) and Selva

We saw the goose, the symbol of the Oca Contrada, everywhere. 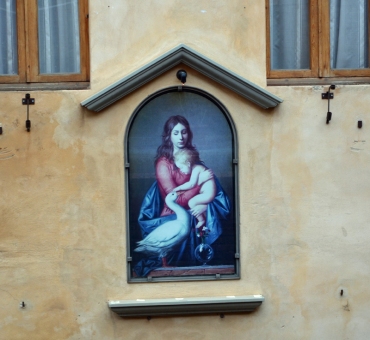 This is another noble Contrada. It was also one of the two Contrade that won a Palio in 2013. As winners, they are eligible to hang and burn the celebratory lights you’ll see below. 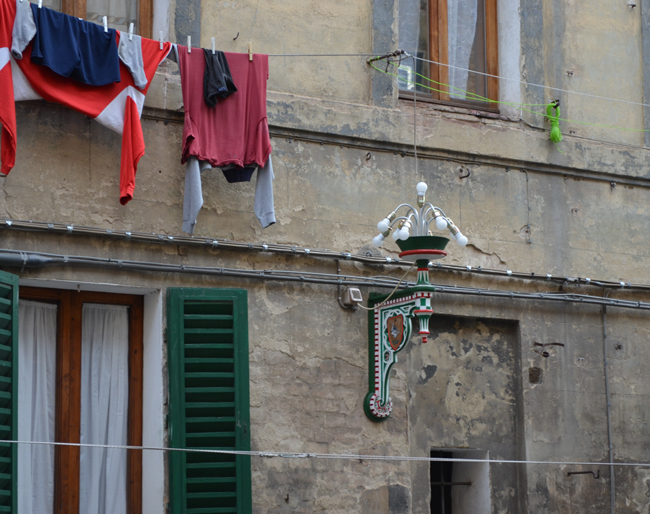 The residents of Selva just celebrated their big feast so they were also allowed to hang their celebratory lanterns though only for a few days. If you look carefully, you can see the differences between the lamps. The ones below are decorated as branches with leaves. Selva is the forest so this is very logical.

Visit http://www.ocaioloextramoenia.it/Palio/contrade.htm for more on the Contrade. Click “English” beside each link for translations.

Siena is also known for its duomo built between 1215 and 1263. Much of the decorative facade was added later. The mosaics came in the 19th century.

The marble church is a fantastic representation of Italian Gothic style. It is almost too much to take in at once. There are so many decorative elements. I’ve seen it before and it was just as stunning the second time around. I wish we could have gone inside to see the black-and-white pillars and ornate decorations. As it was, there was still more of the church to see from the outside.

This is the cathedral’s bell tower or campanile. It was added in the early 1300’s and matches the rest of the church very well. The black-and-white color combination is popular in the city and is said to represent the horses of its legendary co-founders Senius and Aschius.

As majestic and large as the church is today, there were plans to make the duomo larger than St. Peter’s in Rome. Due to missteps in the construction followed quickly by the Black Plaque, the expansion never occurred. Visitors can still see some of the remnants of the attempt.

If you look closely, you will see that the top part of the column juts out a bit and there is some buckling due to the weight of the roof.

Our tour of the city also included a stop to see San Domenico, a church devoted to Saint Catherine. Our guide said that the color of the church is the inspiration for the “Burnt Sienna” Crayola crayon.

Catherine is credited for bringing the pope back to Rome from Avignon, France. One of 22 children, she lived a very interesting life. You can read more here and here. Her skull is displayed in a reliquary inside the church. While I feel sad about missing the interior of the other churches we visited that day, missing the skull didn’t bother me.

Walking away from austerity and vows of poverty, we made our way to Palazzo Tantucci which is held by Monte dei Paschi di Siena, the oldest bank in the world.

This is just one of the three palazzi belonging to the bank.

It’s a bit more elegant than my local branch of BB&T, that’s for sure.

We had a little bit of time to wander around on our own before it was time to meet back up in the Piazza del Campo.

I spotted these fuzzy Christmas decorations, 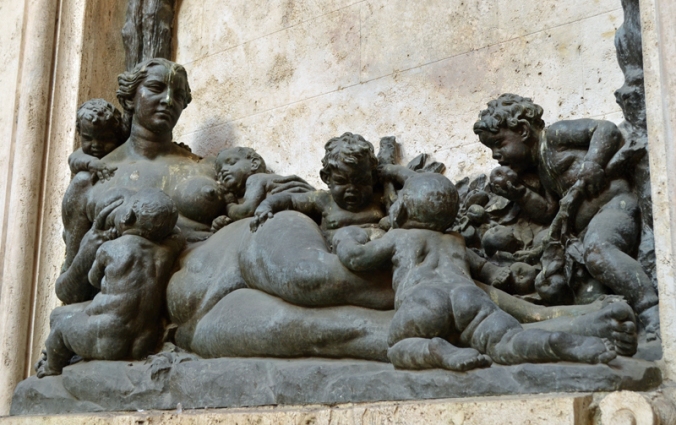 She looks forlorn. Can you blame her with all those kids and all that bird poop?

We made it back to the square just as the sun was starting to peek through the clouds. It was still overcast but there is no rain obscuring my photo of the town hall or Palazzo Pubblico. Visitors can go to the top of the tower but we didn’t make it during our visit. It’s a reason to go back, right?

It took eight years for workers to bring water to Piazza del Campo. This accomplishment was celebrated with the creation of the Fonte Gaia which is loosely translated to mean joyful fountain. The figures were created by Jacopo della Quercia. 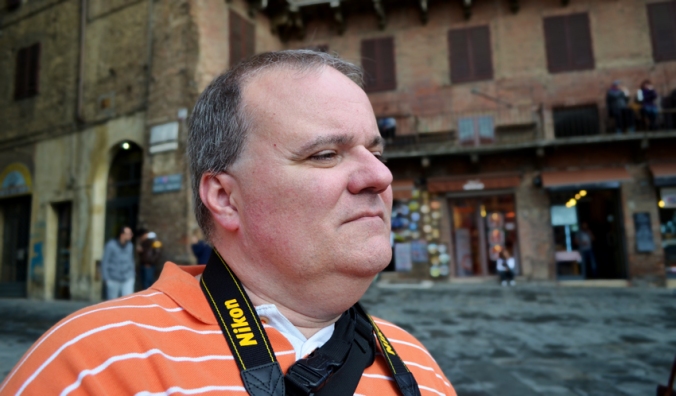 Mr. McB and I pondered the day in our own way.

My grandfather was a brick mason. He loved looking at the way things were constructed and could often tell you about the weather and other conditions when the work was done. I thought of him many times during our visit to the Colosseum and our time in Tuscany. There are so many bricks. He would love to see all of this architecture. Some how just sitting there and literally soaking up the heat from the bricks, I felt close to him.

It was a great day in Tuscany. Next time we’ll do Florence, Pisa, or maybe both.